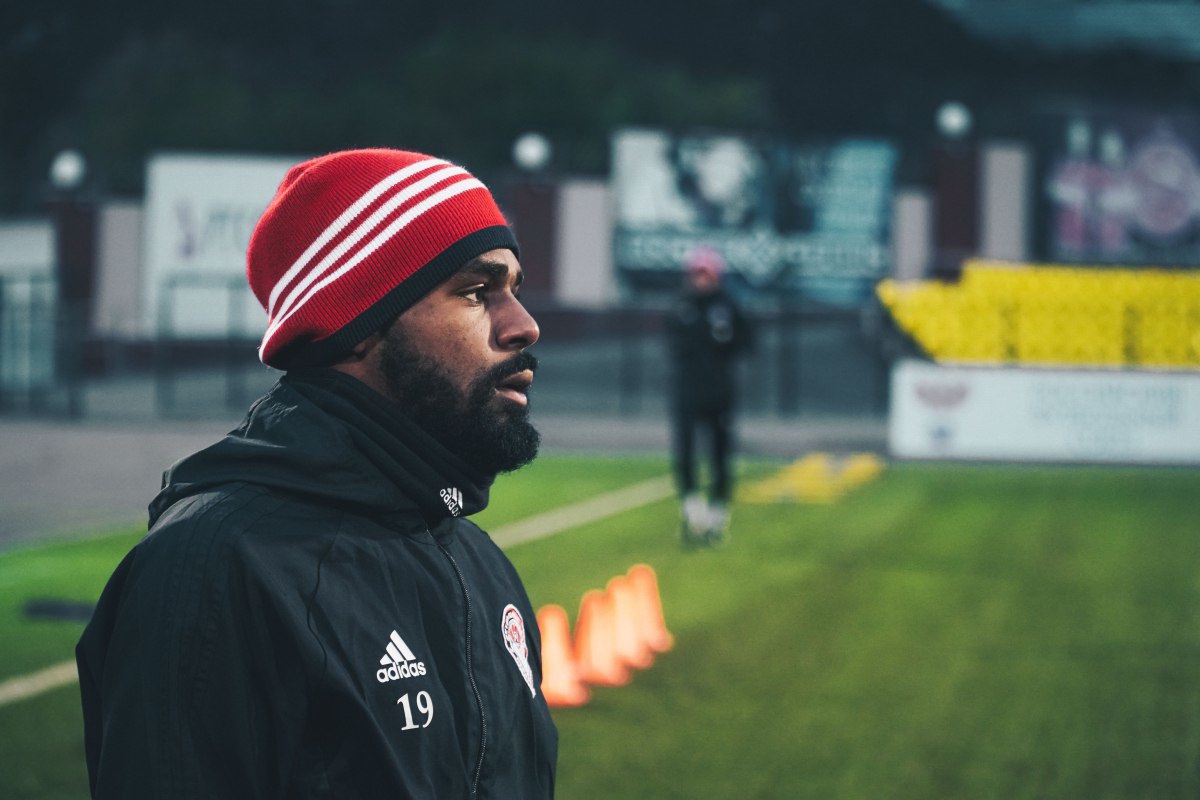 Personally I am lucky in sad moments and in stressful situations: first of all I am surrounded by good people but I also try to think positively.

We are continuing the interview project “Life Rules”. In this project we tell human stories about famous people. We are interested in what drives them in minutes of victories and defeats, who inspires them and why they do not give up. We consider that their experience and their opinion can help those who want to change their way of life and refuse from pernicious drug use and other addictions. Bryan Idowu, player of FC Amkar (Perm, Russia) and national team of Nigeria, agreed to answer the questions of our Revansh.eu portal.

Twitter publication about “chocolates”, (https://www.eurosport.ru/football/russian-premier-league/2017-2018/story_sto6474040.shtml) aroused certain dissonance. Is such a reaction justified or someone just makes a mountain out of a molehill? We have a feeling that those people whom this post doesn’t concern directly, get offended.

We can look at it from different sides. It is evident that those to whom that was said – Brazilians – didn’t get offended. This is a joke, just a routine question, usual in the team, this is how I think; I also experienced the same at various age and in various teams. Just common joke that keeps an atmosphere, there is nothing special in that. It could be offensive to someone and not offensive for someone else. We shouldn’t have posted this joke to Internet because people have different attitudes towards it. For instance, I am, there is also another black football player, and we are both told the same – it can be ok with me and he could be offended. We shouldn’t have posted it to the crowd, but I didn’t see anything offensive or racism in that. I know Dzhikiya (author’s comment – Georgi Dzhikiya – the player of FC Spartak Moscow), he is a very positive and cheerful man, creates the atmosphere; there was a common inoffensive joke which was accepted in a wrong way and someone has made a problem out of it, although in reality there is no problem with that.

From this interview I have made the conclusion that you have a large vocabulary and your erudition. What did you read during the last time, what can you recommend to our followers?

I have read the autobiography of Pirlo (author’s comment – Pirlo “I Think Therefore I Play!”), I really liked it very much, it was interesting to see how he thinks and to learn something new about some players. I would recommend this book for those who are interested in football. Now I took autobiography of Jammie Vardy „From Nowhere: My Story“ and autobiography of Connor McGregor (author’s comment – Connor McGregor “Win or Learn”). An interesting personality, everybody knows him. If talking about serious literary genre, team partner Anton Googe talked about the book  “The Snowman” Jo Nesbø, it was cinematized and it is easy to read.

The former football player George Weah lately became the president of Liberia. What is Bryan Idowu capable of out of the football field?

If I hadn’t connected myself with football than I think I would have been doing mathematics. I was easy at mathematics, this was inherited from my father, and I loved mathematics. Now I don’t know what I will be doing, maybe something connected with music. Music is very close to my heart. I also visited theatre school, that was also interesting. It is evident because of the football I stopped all other activities. So most evident I would take something modern, on the edge of 21st century – blogger, for example.

Some time ago you said that one should be realist. What are the chances of FC Amkar in the Russian Cup  and with supereagles (national team of Nigeria) on the World Championship in Russia?

If taking a look at the net, everything is in our hands. It is possible and necessary to come to final game. In essence final game – it is just one game which is played at any moment not depending on the competitor, the chances in the Cup are very good. Talking about supereagles… of course the championship is very serious, there are many good teams and the group is very unusual (author’s comment – Argentina, Iceland, Croatia and Nigeria), the group of players is gathered, there is a good atmosphere and a good trainer’s club. Supereagles have a good chance to set a record from all the African countries and to go further than others.

A hard question. When you have professional responsibilities and the contract – you are a sportsman, people look after your life and you become an example for someone, so any case you should correspond to this. You understand what risks you undertake when you start using cocaine or something like that. If this becomes known there will be consequences. In spite of how rough consequences are, the guilt is only yours, so you can miss such a chance as World Championship and others. It is hard for me to judge if these measures are effective or not as I didn’t find myself in such a situation. For someone this roughness helps. It deprived him of the dream, of his work and you should correct the situation. Someone can find oneself in such a depression and on the contrary can intensify everything. So these are two different sides of one thing. So mostly this depends on the person himself, on how he takes all this.

According to opinion of some people drugs are the way to cope with stress which arises from rapid rates of life. How do you think one should struggle with stressful situations?

This is individual for each person. Personally I am lucky in sad moments and in stressful situations: first of all I am surrounded by good people but I also try to think positively. In my case I should just come out to the street and breathe, occupy myself with something favourite. Some people find in this  (author’s comment – drugs) the way out, especially when use it for the first time – one is in euphoria, everything seems to be easy as compared with the time before use. So the addiction appears and it is hard to get read of it. So to resort to these measures is a force majeure. Anyway everyone has his own life.

And our special question – what is revenge? How do you understand this?

It can be viewed from different angles. To consider as a payback or revenge to prove someone who didn’t believe in you; or in football to be defeated first and then in the next game to take revenge and to win. Many people in football as well face the critics by other people, they throw mud at them, they see all this and do not pay attention to this so that to take a revenge, to prove on the football field next time and just with their success that you were wrong.

We would like to thank you for the time. Wish you health and success in your profession and in life. And to conclude our discussion – you might have a message to those who tries to find the way out of addiction problem?

Just simply find those people who will support you, who will be able to help you, you are not alone. There can always be found people who I hope can help you find the way out of addiction; and do this not because you want to show or prove someone something but do it primarily for yourself. And the thing is that you want to change your life in such a way that to make it brighter and lighter. Everything is in your hands and I believe in all of you!

Phaedon Kaloterakis: “I have not lost my passion about what I do”